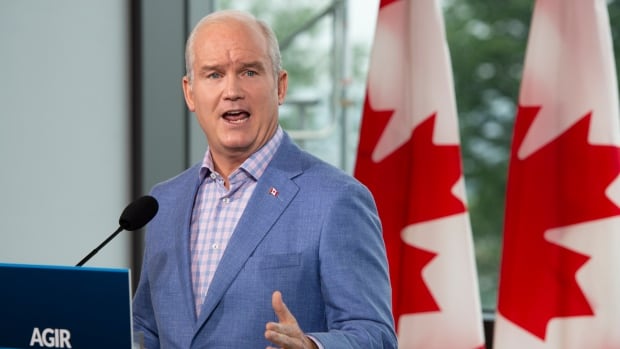 Treating addiction as a health problem, not a criminal one, says O’Toole in plan to tackle the opioid crisis

Conservative Leader Erin O’Toole on Sunday proposed a “compassionate” plan to tackle the opioid crisis, seeing it as a national emergency to help those battling drug addiction.

During a campaign stop at a drug rehab center in New Westminster, B.C., O’Toole said 17 deaths of Canadians every day are opioid-related – and the health crisis has worsened during the pandemic.

â€œAs Prime Minister, I will treat the opioid epidemic like the health crisis it is,â€ he said.

“This means that our goal should be to help people with drug addiction get the help they need to recover.”

The pledges, which are part of the party’s election platform, include $ 325 million over three years to create 1,000 new treatment beds and build 50 recovery centers in communities across the country.

When asked by reporters if he supports decriminalization of drugs, O’Toole said he advocates judicial discretion over treatment options rather than criminal penalties.

â€œI don’t think an addict should be punished. I think they should be helped,â€ he said.

Law enforcement should focus on traffickers and traffickers, not those with addictions, O’Toole added.

The Conservative leader said his party will not block supervised injection sites and will work on treatment and recovery programs alongside harm reduction options.

But Liberal Party spokesman Alex Wellstead said the Tories’ record was to ban safe consumption sites and fight them in court.

“The Conservatives’ record is punishing Canadians struggling with drug addiction,” he said in a statement.

“We will continue to support those facing drug addiction and provide safe and supervised alternatives. We believe in an approach informed by public health experts – not an ideology.”

About 40 new supervised injection sites, where people can inject intravenous drugs with clean needles, have opened across the country since the Liberals formed government in 2015.

Longtime New Westminster-Burnaby MP candidate Peter Julian has said politicians need to ensure a safe supply for people with drug addiction and also need to look at the role of big drug companies in the crisis.

â€œThis is an absolutely tragic epidemic – 17 Canadians a day. And I don’t think Mr. Trudeau or Mr. O’Toole understand the magnitude of this tragedy and are prepared to take on the big pharmaceutical companies to fight it. he said.

Some advocacy groups have called on the federal government to create an action plan that includes decriminalization and legal regulation of drugs, as well as new initiatives to end the stigma surrounding drug addiction.